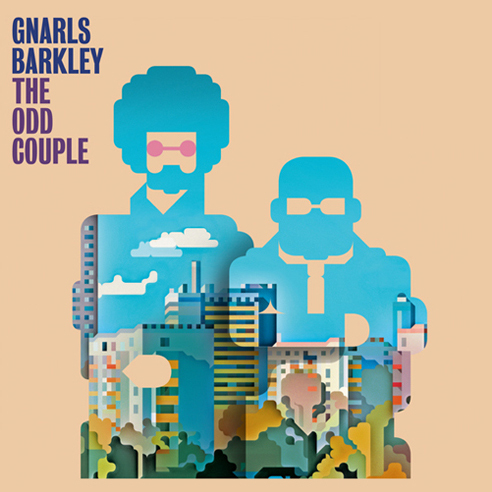 This is the second album from the group Gnarls Barkley, which is made up of producer/instrumentalist Danger Mouse and vocalist/rapper Cee-Lo Green. It was released March 25th of this year. As with their first album, this one is definitely a unique combination of styles that are unlike anything else out in the music world right now. This album has a very introspective feel to it with the slower feel and soulful lyrics found on many tracks. All the tracks come in at under 4 mins, most right about 3 minutes, which makes the tracks feel very short, before you know it you’re 6 or 7 tracks in and the CD’s already halfway over.

“Charity Case” is the lead-off single, and starts the album off great with a groovy funky beat that gets you going right away. Not extremely memorable after the first play, but after another listen or two it catches on pretty quick. It’s got some female vocals mixed in giving it a cool sound not found on the rest of the album. A solid track that would be a good addition to any playlist/mixtape.

“Going On” is a great track. A mix of slower and fast paced music creates a unique sound, but definitely has the vibe of some of the classic 60’s hippy songs. One of my early favorites from the album. “Run (I’m A Natural Disaster)” is the single that leaked out early on the internet. A quick paced beat definitely takes the lyrics and runs with it (pun intended). Not that there is too many lyrics, a 3 minute song that seems to fly by. An interesting song, which has a classic Cee-Lo feel to it from his solo career.

“Who’s Gonna Save My Soul” follows, and slows things down. A haunting slow jazz style beat and vocals. Kind of has an almost Gorillaz style to it. Not one of my favorites, but definitely worth a listen. “Would Be Killer” feels like something that you’d hear during a drugged out montage of the movie “Natural Born Killers.” A slower paced song, feels like you’re on a trip through the mind of this “Would Be Killer” as it descends into madness. “Open Book” is a perfect example of the difference in music that Gnarls Barkley puts out compares to other groups/artists. The song feels like a slower paced song, but the beat is fast and frenetic, with a congo/jungle style feel. Definitely an odd one that probably will not be palatable to most listeners. “Whatever” is a fun song that is sung from the standpoint of a teen talking about how things suck in life, but doesn’t care. A very emo viewpoint of things. A really cool song that’s definitely going to be on a few myspace pages if it catches on and gets some airplay.

“Surprise” is an old-school latin styled song with kind of a 60’s hippy feel. An interesting combination for sure but really cool. Probably one of my favorite tracks on the album. This is one I’d expect to become on of the featured singles, or at least, this should definitely be one of the ones you listen to if you are interested in this album.

“No Time Soon” shows off Cee-Lo’s incredible vocal talents in a ballad “love” song. Great background vocals and a solid guitar/drum machine/flute beat work well together. This song is one I’d listen to a lot, especially if I was putting together an emotional song playlist. “Blind Mary” is a love song of sorts that sounds like a Beatles song that got the Gnarls Barkley treatment. Interesting song with some good vocals by Cee-Lo, worth a listen. Could possible see this one getting some plays on the air.

“A Little Better” is by far my favorite track on the album. Groovy beat with some excellent lyrics and vocals. Unfortunately it’s over much too quick, under 3 mins long not including the faint fade-out sound effects. This one had me nodding my head to the beat as soon as it started though and had that instant like-ability to it.

A solid album throughout, especially if you’re a fan of their style, but there’s no single song that really stands out here the way “Crazy” and “Smiling Faces” did on their first album “St. Elsewhere”; although “Charity Case”, “No Time Soon”, “Surprise”, and “A Little Better” were my favorites from the album and will definitely be keepers that I toss in on my mp3 player and playlists on the computer.